Impact on NRIs in the GCC

Impact on NRIs in the GCC 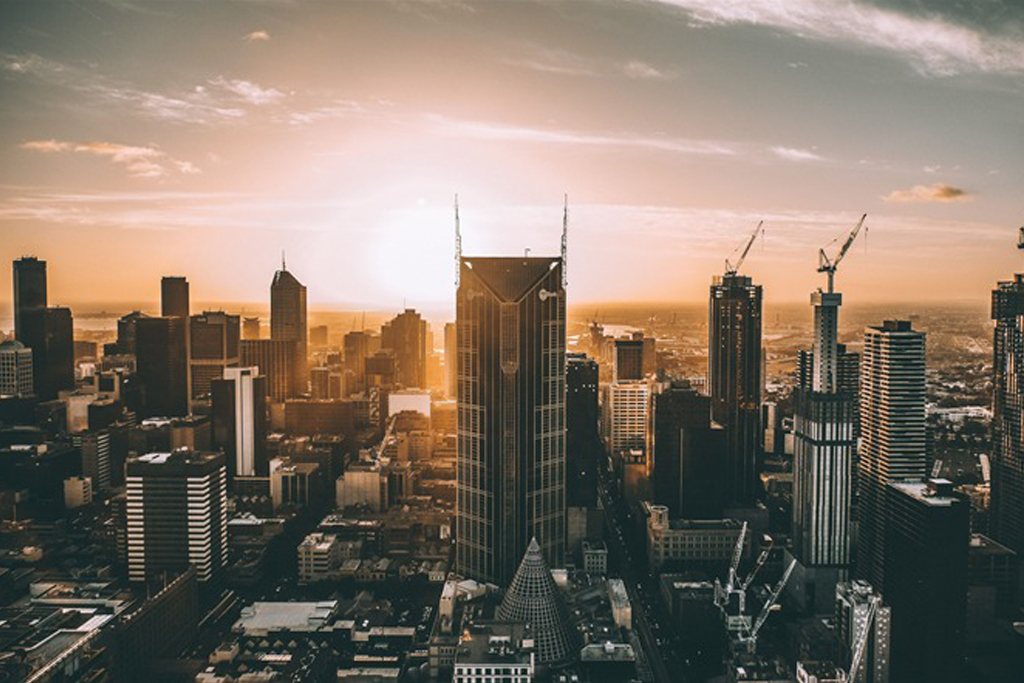 The Finance Bill 2020 has been passed in the Lok Sabha on 23 March 2020 with certain modifications and is currently awaiting the Presidential assent. The Budget has proposed certain amendments in the residency related provisions in the IT Act1, which have been untouched for many years. The purpose of this document is to analyze the impact of these amendments to an NRI, especially to one residing in a GCC country.

Each country defines the concept of residency which is of importance to determine how an individual will be chargeable to tax in its jurisdiction. In India, charge of income tax is not based on domicile or citizenship. The Indian tax liability depends on the residential status of an individual based on his physical stay in India.

In order to determine residential status in India, the conditions to be satisfied can be classified as:

The manner of satisfaction of the above conditions for determining the residential status has been tabulated below:

A pictorial representation of the current residency provisions have been provided below: 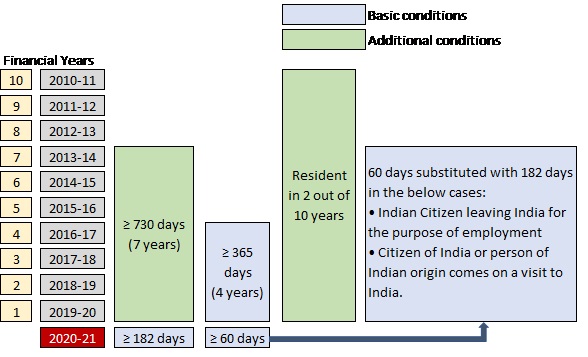 The residency conditions as it stands after the amendment have been tabulated below:

Another significant amendment with regard to the residency condition that created an unrest among various NRIs, especially in the GCC region, is the new “Deemed Resident” provisions.

The Memorandum to the Finance Bill, 2020 raised the concern of “stateless persons” or in other words, country-less persons. The relevant extract of the Memorandum has been provided below:

“The issue of stateless persons has been bothering the tax world for quite some time. It is entirely possible for an individual to arrange his affairs in such a fashion that he is not liable to tax in any country or jurisdiction during a year. This arrangement is typically employed by high net worth individuals (HNWI) to avoid paying taxes to any country/ jurisdiction on income they earn. Tax laws should not encourage a situation where a person is not liable to tax in any country.”

Though the Finance Bill, as drafted initially, created various confusion, the amended Finance Bill has classified Indian citizens having total income, other than income from foreign sources, exceeding Rs 15 lakhs during the previous year as HNWI.

"Income from foreign sources" means income which accrues or arises outside India (except income derived from a business controlled in or a profession set up in India).

A person who qualifies as a deemed resident would automatically be given the status of NOR, thereby, bringing to tax in India his foreign income from business controlled or profession set up in India also.

It is interesting to note that NOR status is unique to India and that no other country has such an intermediate residential status. Some countries provide exemption to foreign source income to their residents. For example, Singapore follows territorial basis of taxation whereby income earned abroad by a person resident in Singapore is not taxed in Singapore unless the same is received in Singapore.

The “deemed resident” provisions could have significant impact on the NRIs in the GCC as individuals are not subject to income tax in the GCC countries. The impact arises from the interpretation of the term “liable to tax” used in the proposed deemed resident provisions.

The Supreme Court in the case of Azadi Bachao Andolan1 distinguished between “liable to tax” and “subject to tax”. The Court observed that liability to taxation is a legal situation whereas payment of tax is a fiscal fact. For the purpose of determination of residence, what is relevant is the legal situation, namely, liability to taxation, and not the fiscal fact of actual payment of tax. In other words, irrespective of whether or not the GCC Government levies taxes on individuals, once the right to tax GCC residents vests only with the GCC Countries, that right, whether exercised or not, continues to remain exclusive right of the GCC Countries2. In such a context, NRIs in the GCC can take a view that deemed resident provisions would not apply to them. However, considering the ambiguity in the provision, it is recommendable for any tax resident NRIs from any of the GCC countries to obtain an advance ruling to get more clarity on this aspect.

However, in order to prove residency in the other country, an NRI would be required to provide a Tax Residency Certificate (TRC) from the competent authority of the other country in which the person is a resident. At present, there are some practical difficulties in obtaining a TRC from the GCC Countries.

Given below are the residency conditions in the tax treaties entered by India with the GCC countries:

The Government has made a fine attempt at clearing the ambiguities that had arisen initially. However, the deemed resident provisions tend to discriminate amongst NRIs as an NR who is resident in the GCC but are not subject to tax in that country by virtue of domestic law of that country would be conferred a different residential status.

Both persons earning the same income and visiting India for the same period is conferred different residential status based on their country of residence.

Further, such provisions may also get attracted in case of such HNWI NRIs who do not qualify as resident in any country due to bona fide reasons, such as businessmen who travel frequently on account of genuine business reasons.

Moreover, considering the difficulties in obtaining a TRC, the Government would need to reach an understanding with the Government in the GCC countries regarding issuance of TRC.

On a combined reading of all the residency provisions, it would be advisable for NRIs with Indian income exceeding Rs 15 lakhs to plan their visit to India in such a manner that their average stay in India in a year does not exceed 3 months.

PravasiTax neither accepts nor assumes any responsibility or liability to any reader of this publication in respect of the information contained within it or for any decision readers may take or decide not to or fail to take..

Our sharing of this presentation along with such protected images with you does not authorize you to copy, republish, frame, link to, download, transmit, modify, adapt, create derivative works based on, rent, lease, loan, sell, assign, distribute, display, perform, license, sub-license or reverse engineer the images. In addition, you should desist from employing any data mining, robots or similar data and/ or image gathering and extraction methods in connection with the presentation.