Can an NRI get lower tax rate on interest income from NRO Account as opposed to 30%? 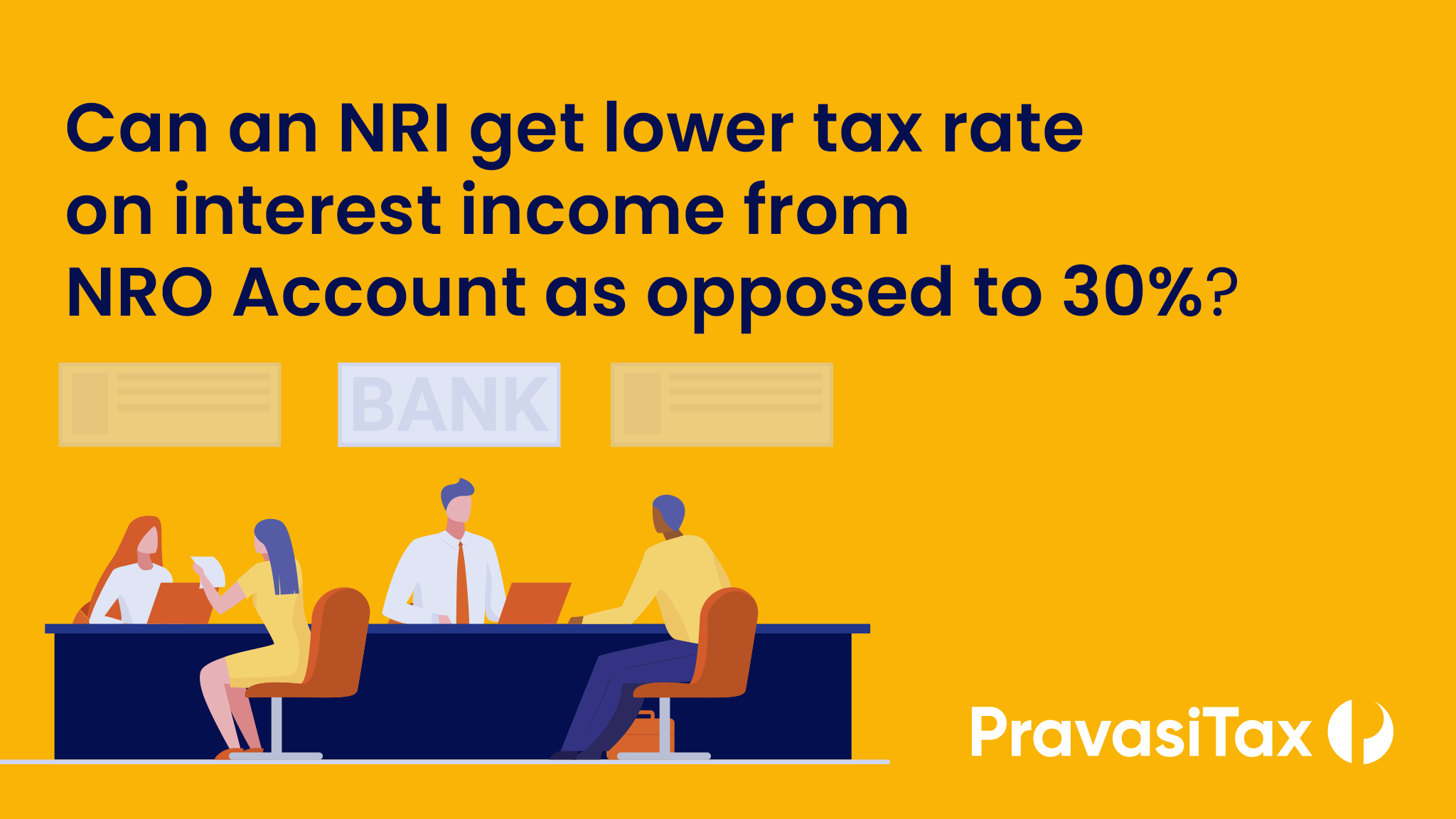 It is not unusual for an NRI who has opened an NRO account with the Banks in India to be completely perplexed or even unaware about the tax consequences of an NRO account, especially regarding how tax needs to be paid on the interest income at the time of filing his tax return in India.

Firstly, let’s recall what the significance of NRO/NRE accounts are for an NRI.

As per Foreign Exchange Management Act (FEMA) guidelines, an NRI cannot maintain a regular savings account in India in his name. He has to maintain his incomes in either a Non-Resident External Account (NRE) or a Non-Resident Ordinary Account (NRO). Among these, an NRO account is a savings/current account maintained by an NRI to deposit and manage their income earned in India, on which he shall be earning interest as well.

In this article, we have analyzed the tax implications of NRO interest income from the following perspectives:

The interest earned on the NRO account is subject to income tax in India. Currently, the applicable TDS rate is 30% plus surcharge and cess, when the interest accrues on your NRO deposit.

In this respect, the provisions of the Double Taxation Avoidance Agreement (‘DTAA’) becomes relevant to an NRI. In the simplest terms, the DTAA is an agreement entered by India with more than 75 countries to help mitigate the double taxation of an individual in more than one country.

Here an NRI has the option to offer his income to tax either under Indian Income Tax Law or under the provisions of the DTAA, whichever is more beneficial to the taxpayer. It has been held by the Calcutta High Court in the case of Timken India Ltd. v CIT (2002) 256 ITR 460 (Cal), that the provisions of DTAA will override the provisions of domestic income tax laws so that the concessional rate of tax prescribed under the DTAA is available to the Assessee and the Assessing Officer is bound to recognize the same.

So, if you are receiving interest income from your NRO savings bank account (taxable income), India becomes a source country, and you are liable to pay tax here. Moreover, the country in which you currently reside also has a right to tax such income as it is the residence country, which can result in double taxation of the same income.

Tax rates and rules of the DTAA vary from country to country. TDS rates on interests earned for most countries are lower tax rates in the range of 10% to 15%.

If you are desirous of availing the lower tax rate deduction as per the DTAA, the same can be availed by you once you submit the below mentioned documents to the Bank:

NRIs who may not be aware about such concessional tax rate may suffer higher rate of TDS @ 30% on the interest income.

Whether NRI can pay final tax at lower rate on interest on NRO Account instead of slab rate?

In the event, an NRI’s taxable income exceeds INR 2.5 lakhs in a financial year, he is required to file income tax return in India. At the time of filing income tax return, a question always arises whether an NRI can apply the lower tax rate (say at the rate of 10%) as per the DTAA instead of the applicable slab rates for an Individual.

Let’s analyse this with an example :

The interest clause under India – Kuwait DTAA reads as under:

What it means : It means that if the interest is earned by an NRI out of deposits in India, the country in which he is a resident has the right to tax this income (i.e. Kuwait) similar to the right of the country where it arises (i.e. India) to tax the same. However, the tax rate on such interest income shall not exceed 10 percent if the beneficial owner of the interest is a resident of the other contracting state (i.e. Kuwait).

On the basis of the above analysis, as per the Income tax law in India, the individual is free to apply either the income tax or the DTAA provisions whichever is more beneficial.

Now, the question that arises is whether the above position is litigation free (i.e. a safe option) or whether the Tax Authorities can content such a tax position.

The routes by which the department may dispute the above position has been mentioned below.

It is interesting to note that the definition of the term ‘interest’ has been defined slightly different under the Income Tax Law and the DTAA.

As per Income Tax Act -  “Interest” means interest payable in any manner in respect of any moneys borrowed or debt incurred (including a deposit, claim or other similar right or obligations).

As per DTAA - The term ‘interest’ means income from debt-claims of every kind, whether or not secured by mortgage.

Hence, the Tax authorities could contend that since there is a slight difference in definition of interest as per DTAA and Income tax Act, NRO interest is not included in the definition of “interest” as per DTAA (as the same does not specifically include the deposit) and accordingly lower tax rate shall not be applicable.

An NRI is not entitled to the DTAA benefit as the interest income is taxable only in the source state (India) and not in the state of residence (eg: GCC countries like Kuwait, UAE etc)

The Tax Authorities could also contend that DTAA has been envisaged in order to avoid double taxation. But interest on NRO Deposit is taxable only in India and not in certain GCC jurisdictions like Kuwait, UAE (where there is no tax on interest income). In other words, as per Article 11 of the DTAA, the lower tax rate of 10% is only applicable when it is taxed in both countries. But NRO interest is not taxed in Kuwait and the benefit under the DTAA cannot be availed by the tax payer.

There have been various case laws with rulings, both in favour of and against the taxpayers. A thorough study on the same is advised to hold the ground.

To conclude, one should keep in mind that the taxation of NRO interest could potentially become a subject matter of litigation with the tax authorities. Taxpayers have often received reassessment orders by the department while assuming the above position and it is important to address the issues diligently to come to a favourable conclusion. Therefore, please note that the income tax return in this respect needs to be filed carefully, after undertaking meticulous research & due consultation with your tax expert.