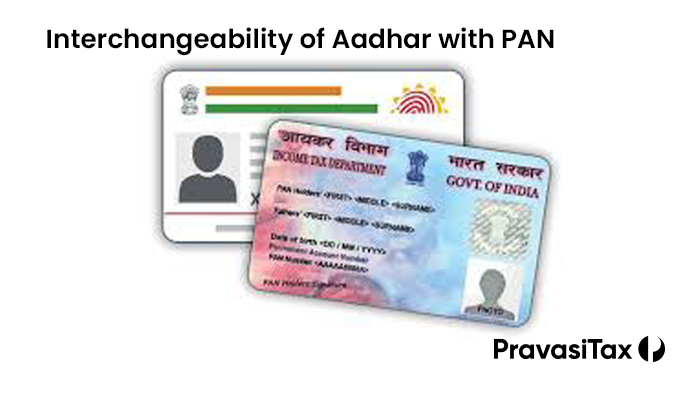 PAN is a unique 10-digit alphanumeric identification number issued by the Income-tax department to the taxpayers. Aadhaar is a unique 12-digit identification number, that can be obtained by residents of India, based on their biometric and demographic data. Here a question arise, whether an NRI is mandate to obtain Aadhar in India. The answer is No, however the Government is now considering in issuing Aadhar Card to NRIs with Indian Passport after their arrival in India without waiting for 182 days stay in India.

Every NRI who has been allotted PAN, shall link his PAN with Aadhaar. In case, assessee fails to do so, the PAN allotted to the person shall be made inoperative.

Further, the Finance Act, 2019 allows to interchange Aadhaar with PAN with effect from 01 September 2019. A person can now quote Aadhaar number in lieu of PAN and such person shall allotted a PAN instantly on the basis of Aadhaar. The intent behind this change is to focus more on Aadhaar as the number of persons holding Aadhaar is higher than the persons holding a PAN.

Hence, Aadhaar can be used in lieu of PAN only in two situations, first, when assessee has linked his PAN with Aadhaar, and second when he does not have a PAN but he has an Aadhaar. Thus, if the PAN becomes inoperative due to non-linking with Aadhaar, he won't be able to use it in lieu of PAN. After multiple extension of the due date to link the PAN with Aadhaar, the last due date is 30 June 2021. If PAN is not linked with Aadhaar by 30 June 2021, it shall become inoperative with effect from 01 July 2021. Income Tax Rules provides that where a person, whose PAN has become inoperative, it shall be deemed that he has not furnished, intimated or quoted the PAN, as the case may be, and he shall be liable for all the consequences under the Act for not furnishing, intimating or quoting the PAN. However, the person can reactivate his PAN by subsequently intimating his Aadhaar to the Department.

Following consequences shall arise if a taxpayer does not furnish, intimate or quote the PAN: