Budget 2021: NRIs in GCC  may become ‘Deemed Resident’ in India 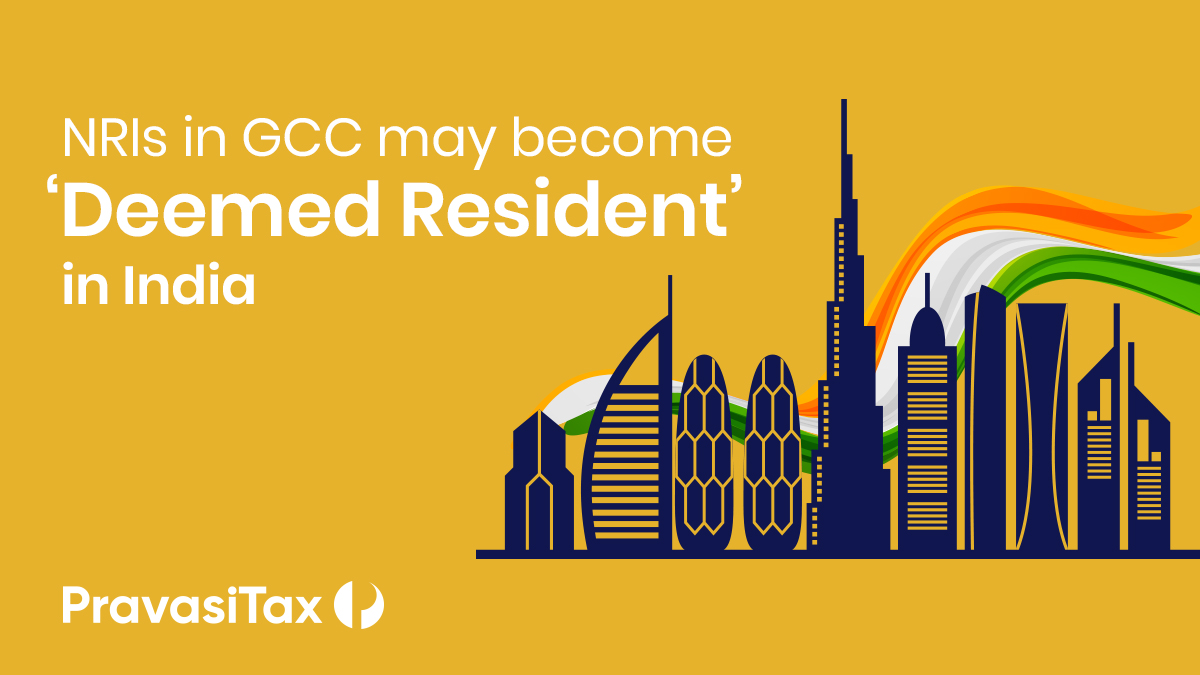 Budget 2020 first introduced the hot-debated topic of “Deemed Resident” in India, to tax those high net- worth individuals who arrange their stay in such a way that they do not qualify to be a resident in any country. However, there were numerous ambiguities surrounding the drafting of the provision during the introductory stage.

The final provision introduced in 2020 was worded to deem an individual as resident in India, being a citizen of India, having total income (other than the income from foreign sources) exceeding INR 15 lakhs during the previous year if he is not “liable to tax” in any other country or territory by reason of his domicile or residence or any other criteria of similar nature.

The “Deemed Resident” provisions made some concerns on the NRIs in the GCC(1) as individuals are not subject to income tax in the GCC countries. The impact arose from the meaning of the term “liable to tax” used in the deemed resident provisions. The term “liable to tax” was not defined under the Indian Income Tax law and accordingly, reliance had to be placed on judicial precedents.

The Supreme Court in the case of Azadi Bachao Andolan(2) distinguished between “liable to tax” and “subject to tax”. The Court observed that liability to taxation is a legal situation whereas payment of tax is a fiscal fact. For the purpose of determination of residence, what is relevant is the legal situation, namely, liability to taxation, and not the fiscal fact of actual payment of tax. In other words, irrespective of whether or not the GCC Government levies taxes on individuals, once the right to tax GCC residents vests only with the GCC Countries, that right, whether exercised or not, continues to remain exclusive right of the GCC Countries.(3)

In such a context, NRIs in the GCC could take a view that new deemed resident provisions would not be applicable to them.

Budget 2021- Term “Liable To Tax” has been defined

Considering the ambiguity in interpreting the term ‘liable to tax’ under the Indian Income Tax Law, Budget 2021 has proposed to define the term “liable to tax”. The proposed definition has been reproduced below:

“ “liable to tax”, in relation to a person, means that there is a liability of tax on such person under any law for the time being in force in any country, and shall include a case where subsequent to imposition of tax liability, an exemption has been provided”.

In light of the new definition of ‘liable to tax’, let us discuss scope of the ‘deemed resident’ provision in more detail:

From the above, it can be interpreted that the deemed resident provisions would exclude individuals who is liable to tax in other countries which have an existing income tax law, which enforce a liability on individuals to pay income tax on their income by reasons of their domicile or residency or any other criteria of similar nature.

In other words, in a country wherein a tax law exists, deemed resident would cover those individuals who do not pay taxes in such countries by virtue of not meeting conditions of residential status or domicile and at the same time he does not subject to tax in India by virtue of being a non-resident in India.

In view of the above, one can view that individuals residing in the countries where there is no tax law in force (Example: GCC Countries or Tax Havens) would not come within the purview of exclusion from deemed resident provision. Accordingly, in a situation where there is no law taxing the income of an individual in a country, (example: GCC Countries), a person residing in such a country would not satisfy the definition of “liable to tax” and hence, automatically falls within the scope of deemed resident provisions.

To summarize, on providing such a definition to the term “liable to tax”, the intention of the Government could be to bring the following categories of Individuals under the ‘Deemed Resident’ scope:

At this juncture, it is important to note that the Government had clarified(4) that the deemed resident provisions are not intended to include bonafide workers in other countries (including GCC Countries) under the tax bracket. However, the Government is silent on ‘bonafide business owners’ in those countries and we expect some clarifications towards for such business owners, particularly tax residents in the GCC Countries since they may also face challenges to get out of the scope of ‘deemed resident’ provisions.

By qualifying as a deemed resident, this would result in a shift in residential status from non-resident (NR) to a resident not ordinarily resident (RNOR). On such a shift, the additional income that comes under the tax bracket as compared to a NR is only the income accruing outside India from a business controlled or profession set up in India. Hence, such a deeming provision is more likely to impact Indian businessmen settled in the GCC having overseas income from a business or profession controlled from India.

Accordingly, on a plain reading of the provisions a position may be adopted that, individuals residing in the GCC (other than bonafide workers) earning more than 15 lakhs taxable income (apart from income from foreign sources) in India could qualify as a “Deemed Resident” in India considering that they are ‘not liable to tax’ and accordingly, does not fall in the exclusion provided in the deemed resident clause (i.e. liable to tax in a country by reasons of domicile, residence or any other similar criteria).

It is also important to note the language used in the Memorandum to the Finance Bill 2020 while introducing ‘deemed resident’ provisions first time in India, where the Government’s intention was to tax ‘stateless’ persons, who is not liable to tax in any country. In other words, if an individual belongs to a State (Country) as a tax resident, such individual shall not be fall under the ‘Deemed Resident’ provisions. Hence, the NRIs who carry bonafide businesses in Gulf Countries can manage to obtain a Tax Residency Certificate (TRC) from the Ministry of Finance (Tax) to prove their tax residential status in their respective countries. Upon qualifying a tax resident in the other country, Indian Tax Law cannot treat the same person as resident in India even by invoking the new deemed resident provision. However, there are practical difficulties for individuals in obtaining the TRC from the GCC Countries. Also, note that individual must satisfy the ‘Tax Residency Conditions’ under the respective Tax Law of GCC Countries and by mere holding a Permanent Residency Card would not be suffice in the GCC Countries to get the TRC from the Ministry.

For any clarifications on the above article, please contact: