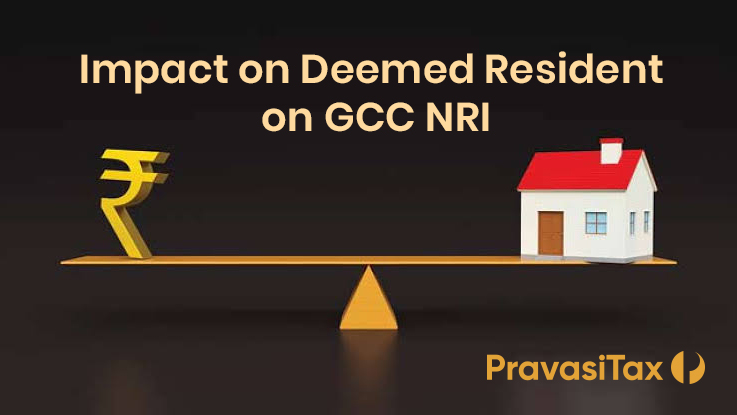 The “deemed resident” provisions can have significant impact on the NRIs in the GCC as individuals are not subject to income tax in the GCC countries. The impact arises from the interpretation of the term “liable to tax” used in the proposed deemed resident provisions.

The Supreme Court in the case of Azadi Bachao Andolan distinguished between “liable to tax” and “subject to tax”. The Court observed that liability to taxation is a legal situation whereas payment of tax is a fiscal fact. For the purpose of determination of residence, what is relevant is the legal situation, namely, liability to taxation, and not the fiscal fact of actual payment of tax. In other words, irrespective of whether or not the GCC Government levies taxes on individuals, once the right to tax GCC residents vests only with the GCC Countries, that right, whether exercised or not, continues to remain exclusive right of the GCC Countries. In such a context, NRIs in the GCC can take a view that deemed resident provisions would not apply to them. However, considering the ambiguity in the provision, it is recommendable for any tax resident NRIs from any of the GCC countries to obtain an advance ruling to get more clarity on this aspect.

But in either situation, in order to prove residency in the other country, an NRI would be required to provide a Tax Residency Certificate (TRC) from the competent authority of the other country in which the person is a resident. At present, there are some practical difficulties in obtaining a TRC from the GCC Countries.

The deemed resident provisions tend to discriminate amongst NRIs as an NR who is resident in the GCC but are not subject to tax in that country by virtue of domestic law of that country would be conferred a different residential status.

Both persons earning the same income and visiting India for the same period is conferred different residential status based on their country of residence. Moreover, considering the difficulties in obtaining a TRC, the Government would need to reach an understanding with the Government in the GCC countries regarding issuance of TRC. On a combined reading of all the residency provisions, it would be advisable for NRIs with Indian income exceeding Rs. 15 lakhs to plan their visit to India in such a manner that their average stay in India in a year does not exceed 3 months.